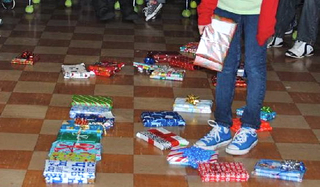 Stymied! Which book gift to unwrap? And will she hang onto it or will the next player purloin it?


How to exchange classroom gifts any time of year without spending a penny!

My students wanted to exchange gifts this Christmas, but I didn’t want to lose class time for literature or pressure anyone into spending money. Rather than say no, I took their request as a challenge: How can I make gifting meaningful, fair, fun, and money-free?

Borrowing an idea from some east coast in-laws, I came up with a Yankee Book Swap game (alternately called a White Elephant or Thieving Secret Santa Game). Here’s how we do it—and this year's most coveted titles.

About a week or so before Swap Day, I ask each student to choose two books from their home library that they have enjoyed. We talk about appropriate choices:


Students wrap both books in one package at home, or use my supply of wrapping paper in school. Students wanted to mark the outside “boy” or “girl” according to their own gender, and I agreed (more on this point later).

I keep a stash of books on standby for students who don’t want to part with their favorites, who (surprisingly true for some) don’t have books at home, or who will end the game with books they really, really dislike.

As the gift pile grows temptingly higher, until there’s exactly one per student, I listen for the sweet music of kids wondering aloud what gems might be inside the packages.

HOW TO PLAY YANKEE BOOK SWAP

We play the Yankee Book Swap game on the day before a break. I create a circle of chairs with those temptingly piled gifts in the center and randomly draw name sticks to choose the order of players.

The first student chooses any gift (whether marked boy or girl) and unwraps it and keeps both titles visibly displayed on his or her lap.

The second student chooses to either:

From this point on, I allow three such “steals” per turn before the next player in line must open a new gift (ending the turn). Also, the third time that a particular book pair is stolen (at any point in the game), that pair becomes “frozen” and is placed safely out of play under the final owner’s chair.

After the last gift is opened, allow the first player to have the last swap—his or her books for any pair of books that’s not “frozen.” Everyone goes home with two good books!

So which book won "most popular"—the most actively sought and swapped? This year, that honor goes to Michelle Paver’s Chronicles of Ancient Darkness fantasy series.

Runners-up: The Giver (Lois Lowry), A Corner of the Universe (Ann Martin), and the Gallagher Girls "school for spies" series (Ally Carter).

With a class of 28, the game took 70 minutes. But what fun! And you don't have to wait for the next holiday season to play it. Play it to start or end a school year, kick off reading month in March, or just because.

My gift: Watching students slowly survey the circle of chairs to scrutinize book covers and scan the descriptions, while some classmates tightly clutched coveted books, pleading to swappers, “Pass me by! Pass me by!” Other students begged to have their books appropriated so they could get back into the swap and grab a fresh set.

Listening to the sales pitches is entertaining. Verbatim: “If you haven’t read anything by DiCamillo yet, you must try Because of Winn Dixie. She’s a Newbery author, ya know.” And: “Soldier X [Don Wulffson] is right up your alley. I know how much you like World War II fiction.”

On the boy-girl label issue, I’d love to hear your thoughts for a future blog post. And, if you play this game, let me know how it goes?