More ARC Reviews: Tweens Tell ME Which Books are "Suitable" 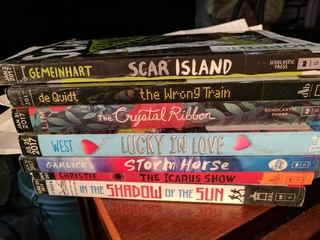 The moment I open a fresh box of unpublished books, a box that has been sitting around mysteriously in plain view to build anticipation and pique curiosity, I let my squad of volunteer have at it. A reading frenzy!

The sixth graders in my Advanced Reader Club (ARC) get to choose which books they want to read, screen, and recommend (or not) for my FREADom Classroom Library.*

But, not every review copy finds a reader and not every chosen book gets a review.

A great cover, an intriguing title, a favorite author, an exciting plot description, an addictive genre can all compel tweens to dive into a book. But will they sail through to the end? Or abandon ship?

Unchosen and unfinished books get tossed back into the box.

Here, in this third post on the 2017 selections, are seven books that made it past the first two hurdles—pick me, read me (ALL of me).

The Wrong Train," by Jeremy de Quidt, review by Abby

The gist: Getting on the wrong train is the least scary part of this chiller, for fans of ghost stories.

I chose this book to try something new. I was rewarded with a suspenseful, spooky, and bone-chilling story fill of horrors and ghosts like you never would have imagined.

The switches between the train station and a stranger's stories are so smooth that you feel like you are IN the story.

de Quidt is the new Mary Hahn. The stories are new but feel like they've been around for years. They are so interesting to read that you just don't want to put the book down. I would suggest it to anyone who dares to read it.

The Crystal Ribbon, by Celeste Lim, review by Leah

The gist: A young Chinese girl with a name that promises great destiny is sold as a bride to a wealthy family.

Celeste Lim did a good job of keeping me hooked and "booked."

The book is about a girl named Jing who is sent away to her three-year-old husband's house [an arranged marriage between children]. Instead of being treated like a daughter, she is treated like a servant.

The family sends Jing away to be an entertainer of men, but she is finally able to escape from them and make her way home. All the while, she tries to figure out her destiny. Rated: 9 out of 10.

The gist: A freak accident leaves the misfits and outcasts at The Slabhenge Reformatory School for Trouble Boys on their own. But freedom soon leads to danger.

Scar Island was a good book, but it was not my type of book. The thought that the boys were treated that badly was terrible. When the water got dumped on Jonathan because he was talking and he had no pillow—that was harsh.

Jonathon got so cold he could have gotten very sick. The terrible incident that happened to the staff was creepy but got be thinking about how that could have possibly happened.

I suggest you get this book for the class if people like mystery and scary disappearances.

Lucky in Love, by Kasie West, review by Hailey

The gist: Lucky Maddie wins the lottery but should she tell Seth, her charming coworker? Money, love, and friendship don't always mix.

This story warmed my heart. It balances between a story of love, luck, and friendship. Maddie is sort of a nerd and not very popular. She has to deal with family problems but that problem is solved when she gets lucky (winning the lottery).

Maddie works at the zoo with a guy named Seth. She is slightly crushing on him but can't be his girlfriend because of her best friend's pact.

This exciting story is a great book for people who like romance and adventure novels. Rated: 8 out of 10

(Note: Publisher Scholastic recommends grades 7 and up, ages 12 and up)

The gist: A lonely and orphaned boy, living on a remote island, saves a horse after a shipwreck.

I've never read anything like this before. At first, I thought the beginning was going to be slow. When I read the first few pages, I was surprised. It dove right into the plot.

I like the plot because it has that sad back story (mother missing, father dead). Then the main character goes to live with a relative and the story gets more intriguing.

This book has adventure, animals, and some action and is an easy read, with spaced lines and a medium font, so you don't have to worry about small letters. It is only 256 pages, not too long for those who absolutely hate long books.

The Icarus Show, by Sally Christie, review by Brady

The gist: Do you believe a boy can fly?

The book has a good and interesting plot and the characters are diverse and well thought-out. From the jacket cover:

"Alex has worked out a foolproof plan to avoid being picked on: Don't react.... But, one day, Alex gets a note in his bag that forces him out of his safe little world. Who sent the note? And is what it promises true—will a boy really fly?"

The climax is intriguing, seeming both literal and metaphorical.

In the Shadow of the Sun, by Anne Sibley O'Brien, review by Dominic

The gist: On a family vacation to the isolated country of North Korea (!), Mia's father is arrested as a spy and she holds the key to freeing him—if she can.

This book gives the reader a peak at what happens in the daily life of a North Korean. The reader is brought along on Mia and her brother Simon's action-packed journey and given rich history about the country.

Anne O'Brien is able to paint a picture in the reader's mind of the landscape of Pyongyang (the capital city) and the countryside. She has done a fantastic job writing about the world's most mysterious country, North Korea!

*Reminder: I have not read any of these books, yet, and so am trusting students to let me know if they think there's anything "unsuitable" between the covers. They did not.