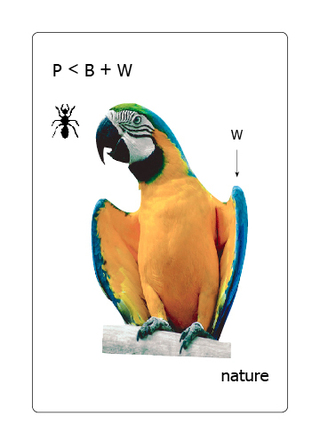 As a conversation group coordinator and mentor for Washtenaw Literacy, I've been teaching English language to adult immigrants for almost 20 years. During that time, I have created volumes of materials and dozens of games. My go-to product is a versatile picture card deck for playing play 100+ games and activities. I use it every time I teach, from simple conversation starters to adaptations of popular games such as rummy, Go Fish, and even Texas Hold-'Em Word Poker!

PUBLISHERS: Contact me if you'd like to see a prototype a proposal, and a list of activities and games. Teacher response from tutor volunteers, the Washtenaw Literacy experts, and my two TESOL presentations has been phenomenal!

TEACHERS: I do workshops! The general topic is how to use games to teach English language to adults and teens, but I also have specialty talks on storytelling, creative use of picture cards, and skill- or level-specific games. 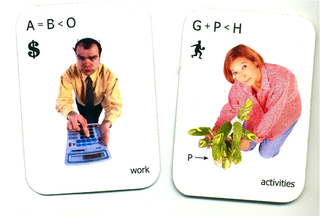 One of dozens of games, we play a version of The Dating Game that sparks passionate and conflicting conversation about what makes a good match for life. 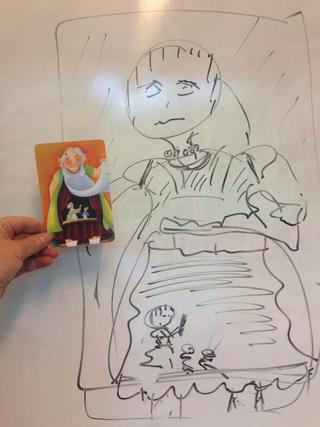 My Art Talk Game: ELLs describe a picture that I try to draw, blindly. 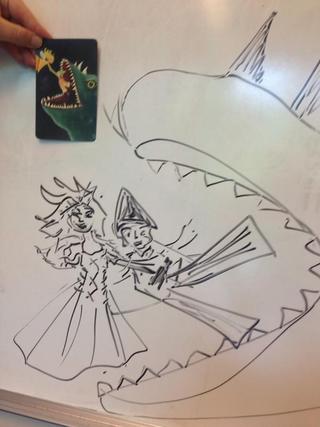 Then, they each take a turn at describing and drawing with a partner. Embellishments encouraged!

Here's my handout from a 2008 TESOL presentation, describing a series of storytelling games that I play with my mixed-level adult ESL groups. The games are easily adapted for teens and tweens and include:

Something About Me (an easy biography icebreaker)

The Lively Conversation Game (learning to interrupt, to listen/talk/think simultaneously, and to gain fluency)

Handout and free alphabet cards from my TESOL presentation "Create and Adapt Games to Motivate Adults." The cards are for playing my ESL version of Hangman and a simple phonics game. 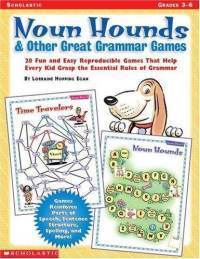 Q. What did the left eye whisper to the right eye?
A. Between me and you, something smells.

Q. Which side of a chicken has the most feathers?
A. The outside.

Q. What did the shy pebble wish for?
A. To be a little boulder.

Q. What are the two strongest days of the week?
A. Saturday and Sunday. The rest of are weak days.

Q. What did the balloon say to the cactus?
A. Ssssssssst.

Q. What is a short word with a lot of letters in it?
A. Mailbox.

Q. Why do hummingbirds hum?
A. Because they don’t know the words.

Q. What has four wheels and flies?
A. A garbage truck.

Q. Why did the criminal get off lightly?
A. Because he said pretty pleas.

Tips for Creating and Playing Educational Games with Adults

Games aren’t just “kid’s stuff.” They’re motivational tools for adults and kids alike. In fact, I would argue that games have an even more important role in adult learning than in childhood education! Here are a few reasons:

1. My English language students work all day or have family responsibilities. They’re often tired and distracted and games energize them in a way that fill-in-the-blank worksheets and rote exercises simply can’t.

2. It's plain common sense that people who are having fun and paying attention learn better.

3. Games naturally incorporate several learning styles—auditory, visual, social, kinesthetic, tactile, and so on. Above all, hands-on learning "sticks" for everyone.

4. Good games include an element of problem solving and strategy. Whereas young children tend to learn by trial and error, adults and teens have mastered higher order thinking skills and can put them into practice while playing a game.

PRACTICAL APPROACHES FOR THE CLASSROOM

Here are a few things I’ve learned about adapting, creating, and playing games from my experience as product development director of Aristoplay, a publisher of educational board games, coupled with a decade of playing games with groups of adult immigrants, beginner to advanced, from all around the world.

1. Choose your games with the fun factor in mind. There’s a difference between educational games and games that happen to be educational. Many "learning games" teach important skills and are useful classroom tools, but they aren’t necessarily fun to play. They feel more like exercises or activities than games.

Although I've invented many games from scratch, I prefer to seek out existing games that I know play well, including commercial products that I enjoy with my family, and then adapt those games to beef up or incorporate solid educational content and language skills. Some of those adaptations are included in my 2007 TESOL presentation packet, available to all as a free download in the left-hand column.

2. Spell out the skills before and after. Good educational games teach the very same skills and content that workbooks do, and it’s important to point this out, especially for students who don’t play a lot of games. You might encounter a little skepticism from those who are used to formal lessons, but this quickly fades.

I point out that chess is a game—an argument that hits home for Russians in particular. Also, I follow up every game with a solid review of new vocabulary, grammar, and concepts learned.

Keep in mind: Busy adults need to know why they're learning a lesson. It helps if the lesson has some immediate value to them ("I learned 12 new adjectives to make my writing more precise and interesting.").

3. Keep it simple. I’ve played some good board games with lots of pieces and rules and papers to keep track of. The problem is, pieces get lost and take time to get out, set up, and put away. Also, with a large class split into small groups (see #4), you need multiple sets.

More often than not, I find myself turning to the simple games—often just a deck of cards or a set of letter tiles and a dry-erase board. You don't need lots of fancy pieces to have fun. The vocabulary card game Apples to Apples is an excellent example. I use a select set of the green adjective cards and substitute my Letter Perfect picture cards for the nouns. Hangman is another good example. My version uses $50 bills, a set of letter cards, and a dry-erase board. For beginners, I add a handful of Letter Perfect English cards and pre-teach the words.

4. Limit group sizes. A typical board or card game is for two to four players with good reason: No one wants to sit around waiting for a turn. Six is the maximum for most games, with the exception of team games like Taboo and Pictionary, which lend themselves to larger groups.

5. Show, don’t tell. I don’t give my learners written rules, even simplified ones. It takes too much time to go through them. It’s easier to play a pretend round until everyone catches on, and then announce that the “real game” is about to begin.

Also, I've encountered students from some cultures who are new to basic game playing skills and need simple demonstrations: shuffling and dealing out cards, rolling dice, moving around a game board, keeping a tally score, rotating turns clockwise, and so on.

6. Watch the time. Keep games short (15-20 minutes) to maintain interest and to make sure that students can finish. What a letdown to play an exciting game and never know the outcome! It's like taking a test and not being told your score.

7. Close the notebooks and shut off the electronic translators. Some students will be tempted write down vocabulary words and notes or look up words in dictionaries or on their electronic translators. I discourage this during game time to avoid slowing down momentum. Nothing kills a game faster than someone who’s distracted during his or her turn. Also, a big benefit of game play is social interaction (see #8), and you don't want players buried in their notebooks.

8. The more interactive, the better. Players should be talking to each other, exchanging things, asking and answering questions, acting and reacting, competing and/or cooperating directly, and so on. You’re there to facilitate and monitor and move things along, but, ideally, the students should be playing the game with each other, not through you. A lack of interaction is one reason I rarely play Bingo learning games.

9. Repeat, repeat. Students sometimes have trouble understanding each other because of accents or different English ability levels. Repeat, rephrase, correct (if necessary) what they say to each other, as often as you can.

10. Keep score! Some teachers are reluctant to do this to avoid having “losers” or putting pressure on students, but scoring is a key component of game play. It’s what makes players want to win, want to follow the rules, want to succeed, want to do better the next time. Remember: These are adults, not kids; they won't cry if they lose.

If you don’t keep score or have a decisive resolution (a “finish line” or “pay-off” of some sort), it’s not a game—it’s an exercise—and you lose the motivational push that games provide. Keep in mind that it's not just about "Who won?" but also "We did it!" and "Look how far we came!"

11. Incorporate an element of luck—drawing or choosing cards at random, bonus cards, rolling the dice to move ahead or take an extra turn, for example. While the point of these games is to learn and improve English skills, luck levels the playing field to give everyone a chance at winning. It’s one way that game inventors avoid a “runaway winner” situation.

12. Use games to document progress—an informal assessment tool! The first game session is often the shakiest, as students get used to the rules and learn strategies. After introducing a game, I play it several more times in consecutive sessions at higher skill levels or with varied content and point out to students the progression of improvement and the levels of mastery. Adults catch on faster than kids, so you can “up” the level of play quickly.

13. Embrace both competition and cooperation. They’re not “bad” or “good.” They’re vital tools for game inventors and educators alike. Most good games are a mixture of the two dynamics.

14. I skip the prizes, but that's up to you. I don’t use prizes or rewards because I find that adults don’t need them. They genuinely want to succeed and improve, and that’s motivation enough.

15. Leave 'em laughing! If you’re having a game day or long session, start with a calm game (like Hangman) and save an energetic one (like Taboo) for the end—the last 15-20 minutes of the session.

16. Be enthusiastic! Cheer people on! Clap your hands! And relax. Games are about having fun, and your attitude will be reflected in your learners.

For every game you create or play, ask yourself:

Learn American pronunciation and conversation with a classically trained opera singer! You can view manay of Rachel's videos, listen to her podcasts, and get a one-month flavor of her course and ebook for free. Subscriptions are $14/mo or $144/year. I love the learner challenges, where her 1 million + followers are asked to create short video snippets to teach an aspect of English. The crowdsourced content is both a learning and sharing experience for all.