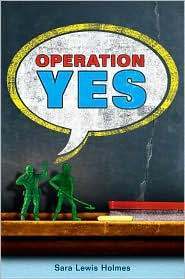 Click on the image to buy OPERATION YES on Amazon.

Before handing this middle grade novel to a student, I ask a few questions:

What things are you are willing to say, “Yes!” to? Cleaning your room? Going to church on Sunday? Babysitting young children? Digging for a lost ring in the kitchen garbage? These day-to-day tasks are easy to agree to, and sometimes, just as easy to say no to. (I'd love to hear from some kid about that!)

But what if your parents say, “Yes” to something big that affects you directly—like serving in the military? How would your life be different?

What if your mom or dad were deployed in Iraq or Afghanistan? What if you had to move every couple years to a new military base; new home, new school, new friends? Would you even have close friends?

Author Sara Lewis Holmes is married to an air force pilot and has raised two children. She wrote OPERATION YES based on her family’s experience in the military.

In an interview with author Kathy Erskine, she said, “Much of my family’s real life is in there—including air shows, FOD [foreign object debris] walks, 'remove before flight' key tags, the sound of flight suits in the dryer, living on base, moving often, dealing with deployments, bravery, fear, uncertainty, hope, and the kindness of all the communities we’ve been a part of.”

While reading this book, I kept making connections with the novel Countdown, by Deborah Wiles (also a terrific read). Both stories are told from the point of view of a military kid. In fact, OPERATION YES has two kid narrators, Bo and Gari, who are cousins. Their lives are thrown together when Gari’s mother is deployed to Iraq, and Gari comes to stay with Bo and his family.

The difference is that Countdown revolves around historical events of the 1960s, whereas OPERATION YES is set closer to present-day Iraq. Bo and Gari provide an inside look at being a kid living on a military base and having a parent fighting overseas—in a war we are still fighting today!

Bo hates school but starts to take an interest in sixth grade when he meets his strange new teacher, Miss Loupe. She marks off a taped space in the front of the room and invites the kids to come up and say yes to acting.

When Gari comes on the scene, she is more concerned with protesting the military, which could get her and Bo into serious trouble: Bo’s Dad is commander of the entire base!

The plot turns when Miss Loupe’s brother goes missing in action. All the kids pull together as a team to help her (with amazing results!) in a mission called "Operation Yes!"
—Louise Hopping

I applaud your choices. All are great books by authors who know their way around the tween world. I suspect my latest mid-grade adventure, set in the Aussie outback, would fit your list of books that HOOK tween interest.

Margot, many thanks for the tip on your outback story. The Land Down Under has always had a strong pull for kids. Besides literature, I teach geography and Australia is a perennial favorite. Ok, I admit, next to N. America, it's my favorite continent, too. Hmmm, I think you may have hooked me to check this one out!