The Cardturner, by Louis Sachar 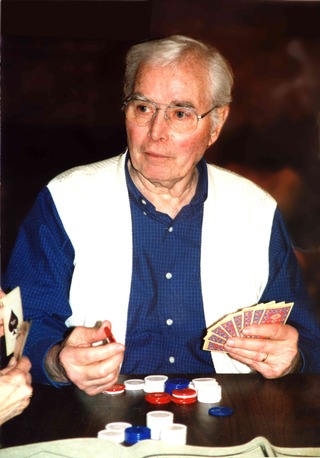 That's my Uncle Bob, playing a family game of Michigan rummy. My mother's about to hammer down the ace of spades (left).

When I heard about THE CARDTURNER: A NOVEL ABOUT A KING, A QUEEN, AND A JOKER, the new book by Louis Sachar (Holes, There’s a Boy in the Girls’ Bathroom, and Sideways Stories from Wayside School), I had to have a copy for my own bookshelf, let alone the classroom lending library.

Playing cards and board games was a central part of growing up in the Hopping household. To this day, whenever we get together, some game or another eventually comes off the shelf.*

THE CARDTURNER quickly pulled me into the not-so-great life of 17-year-old Alton Richards. What kind of a name is Alton, anyway! Alton drives a beat up car, has no money, no job, and suddenly, as summer vacation begins, he has no girlfriend.

On top of all that, his mother insists that he drive his very wealthy great uncle Lester to Bridge Club four times a week. Bridge is a "boring" card game that Alton knows nothing and cares nothing about. The truth, as Alton well knows, is that Mom wants him to be nice so that old Uncle Lester will remember them in his will.

Alton has been dealt a pretty crummy hand and is feeling a little "played" himself! Even so, he copes by maintaining a dry sense of humor.

Great Uncle Lester turns out to be a curmudgeon, but also an amazingly talented bridge player. He can remember every card that has been played. That's a skill most card sharps master, but what's amazing is that Uncle Lester does it even though diabetes has left him completely blind!

In steps Alton, Lester's new cardturner. It’s Alton’s job to tell his uncle what cards he has been dealt and to play the card he’s told to play—without question.

Uncle Lester’s friends at the Bridge Club call him Trapp. Is it because he has a "steel trap mind" or a very sharp tongue? Probably both. Trapp’s bridge partners sympathize with Alton, who has to suffer his uncle's rudeness.

As the story progresses, Alton learns how to play bridge and picks up interesting bits and pieces about his uncle’s life. Something tragic happened when Uncle Lester was a young man. He had a wife and a bridge partner, but lost both, along with his chance at a bridge national championship. Now, Uncle Lester would like another shot at it before he dies.

Curiosity drives Alton to start digging around in his uncle’s past. Along the way, he meets Toni, his uncle’s previous cardturner, who was fired on the spot during a game for asking, “Are you sure?”

Toni is a beautiful girl, but there's something a bit odd about her. And, although Alton would like to date her, he first needs to find out if they are related or not.

Kids: Are you still thinking, “I am not sure I want to read a book about Bridge?” Despite the family intrigue, the dry comedy, and the love interest? Check out this 4:30 minute interview with Louis Sachar about THE CARDTURNER (and getting started and growing as a writer).

*I wonder what your families do for fun?

Do you think this is a good book for me to read? I have been asking around for advice on choosing a perfect book. Ms. Hopping is my teacher, and she is a great one. Thank you for everything!