Let the Battle of the Books Begin! 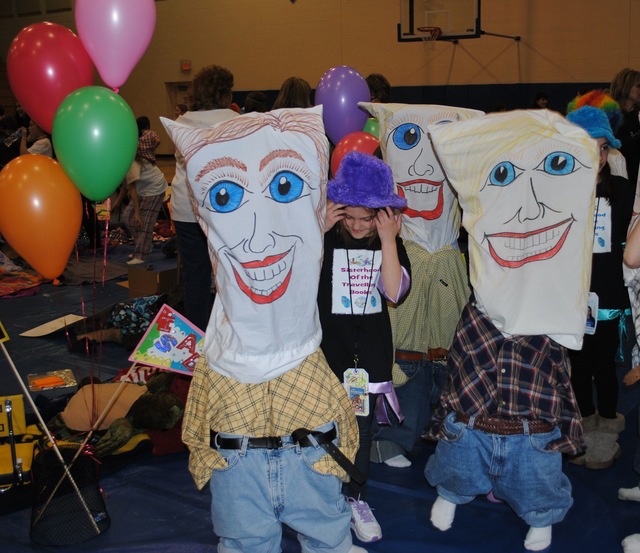 Battle of the Books turns reading into a rowdy costume party! Meet the members of the Pillow Readers team.

One evening in February, well past Halloween and not exactly Mardi Gras, our school gymnasium looked like a costume party. Six grey-haired old men hobbled in on canes, followed closely by a bevy of beautifully adorned Greek goddesses. Some hooded grim reapers crept in next and then—what were they? Pillow people?

What whipped these kids into a costumed frenzy? I’m proud to say: books. At this highly anticipated event, the school’s fourth through sixth graders compete to answer questions about eight books in our annual Battle of the Books quiz competition—BOB for short.

Preparation for this year’s BOB begins right now, at the start of the school year. I help choose the eight book titles and we keep them under tight wraps until December. The trick is to find books that appeal to ages 9 to 12 and provide a range of reading levels. You don’t want fourth graders feeling frustrated. (I’ve provided a sample book list at the end of this post.)

Soon, our new students will form their teams of six and secure a coach (a parent or teacher). In our school, that’s 16 to 20 teams, with 96 to 120 students participating. No one is turned away, so some teams might have seven or eight members.

Each team chooses a name: The Book Bosses, Contagious Readers, Pretty Little Readers, Agent 00 Divas, the Grim Readers, to name a few recent ones. Then, kids design costumes—in some cases very elaborate—to go with their theme.

By December, teams can’t wait to report to the gym to collect their stack of eight books—an event in itself. I see fists pump and hear shouts of excitement every time kids realize they have already read a title. Sometimes, students argue over who gets to read which book first. (Be still my heart!)

When the dust settles, the real work begins. Over the next two months, teams meet at lunch, before school, and on weekends to write and answer practice questions, memorize the spelling of author names, and discuss the plots, characters, and settings of each book. By the time the competition rolls around, they know these eight books cover to cover.

The BOB competition is a rowdy event that takes place every February in the gym. The bleachers are always packed with parents, grandparents, and teachers, who ooh and aah throughout. Even some alumni come back for this event to cheer on siblings and check out the costumes!

Costumed teams sit on blankets on the floor, with their coach on a folding chair behind them. (Coaches are often just as nervous as the kids.) Each team has pencils and 32 slips of paper printed with the team name.

Our BOB coordinator, an energetic parent, is the writer and gatekeeper of the official questions. (Even we teachers don’t see the questions before the event.) She prepares four short answer questions per book (for a total of 32), which she presents in two halves—16 easier questions in the first and half and 16 harder ones in the second half.

A few examples:
Who was Mona Lisa (from The Second Mrs. Gioconda)? (The second wife of an unimportant Florentine merchant.)
Who found Dismay's lavender-filled collar after the storm in Each Little Bird that Sings? (Declaration found it near a storm ditch.)
What is the full name of the preacher in Elijah of Buxton? (The Right Reverend Zephariah W. Connerly the Third. Read this book? Here's a free quiz.)
What is the MPOOE club in The Word Eater? (The Most Powerful Ones on Earth.)
What kind of toad is Limpy in Toad Rage? (A cane toad.)

As the competition begins, coaches move over one chair clockwise in order to serve as preliminary judges for another team. After the coordinator has read a question twice, teams have 25 seconds to write their answer on a slip of paper. As teams take turns stepping up to the microphone to announce their answer to the crowd, younger siblings serve as runners, picking up written answers and delivering them to the judges’ table.

As an official judge (one of four) at the head table, I have the leeway to give partial credit for an answer, but we generally award 5 points for a correct answer and 1 bonus point if the author’s name is spelled correctly for a maximum of 6 points per question.

The top three scoring teams win gift cards to a bookstore and all participants receive a certificate and refreshments in the cafeteria. But this popular event is less about rewards and more about building a community of readers. Kids learn eight books, backward and forward and inside out, together—and share in that experience across grades and classes.

We've used these books through the years for our competitions—again, with the goal of spanning fourth to sixth grades.

Battle of the Books is a popular, nationwide incentive program for good reason: It works. Does your school participate? What tips, titles, and experiences would you like to share?