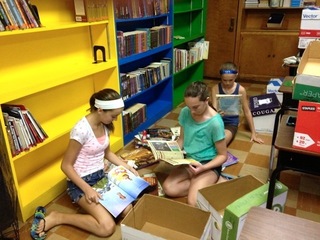 Sometimes books just grab you, and you can't help but peek inside. A big *thanks* and a *hug* to my classroom library summer work crew.


Two years ago, I started this Readalicious! blog with a post about the ritual of rebuilding my FREADom classroom library every school year. It's a daunting task of unpacking, sorting, shelving, and cataloguing that never fails to remind me of why I love books.

This year, I am grateful for the help of one of my incoming sixth graders and two former students. These motivated girls worked doggedly for hours! I’m going to have the most organized library I’ve ever had!

They started with the easy stuff—series books and folklore. Then, they put my biographies in alphabetical order by subject and my historical fiction in timeline order (not that the books will stay that way for very long!).

When they got to the nonfiction section, which is growing in response to the common core initiative, progress slowed a bit. They separated books into categories: U.S. history, presidents, science, geography, ancient history, world history, wars, and miscellaneous. I loved listening to them discuss and debate which books belong in what category.

In the meantime, I kept busy at the book repair and weeding station. Deciding which of my old "friends" to jettison in order to make room for new titles is very, very difficult for me. Among the new acquaintances are three books I highly recommend.

They made the 2013 Newbery list for good reason: The One and Only Ivan, by Katherine Applegate (the medal winner) and honor books Three Times Lucky, by Sheila Turnage, and Splendors and Glooms, by Laura Amy Schlitz. Schlitz is a librarian and former Newbery winner for Masters! Sweet Ladies! Voices from a Medieval Village.

Ivan is a gorilla who, sadly, has been in captivity for most of his 27 years. The story is told from his perspective, which is inside a glass cage in a shopping mall.

Many of my students are champions for the environment and are especially passionate when it comes to animals. They will be fascinated by this look inside Ivan’s life and heart. Though the book is an easy read, it provokes deep thinking about the issue of animals in captivity.

I will suggest this title along with Kate DiCamillo’s The Tiger Rising (a 2001 National Book Award finalist), which takes a darker view; here's a description and discussion guide.

Three Times Lucky is a wild ride through the summer adventures of one Miss Moses LoBeau, a self taught detective, who is on the trail of her mother (who apparently set Moses adrift as an infant during a hurricane where she was picked up by the Colonel – he’s the one who names her Moses) and a murderer that is hiding somewhere in the small town of Tupelo Landing, North Carolina.

The story comes full circle when a hurricane bears down on the town just as things get intense for Moses and her best friend, Dale. This time around, rather than losing a mother, Moses discovers who her friends and family really are.

My personal favorite of the three titles is Splendors and Glooms. Schlitz described it as her "homage to Charles Dickens" in a Publishers Weekly interview.

The book has a bit of everything: an engaging setting (London in the 1860s), a mystery (a young girl disappears), a little magic (a fire opal owned by a witch), and two orphaned children who work for an odd puppeteer named Grisini.

The children, Lizzie Rose and Parsefall, start out just trying to make a living with the puppeteer but then find themselves caught up in a web of intrigue and danger. Who is really pulling the strings?

Three in, three out. So, which old friends to retire? It's agonizing, I tell you!
1 Comments

Being surrounded by all of these books gets me excited about the start of school!