Hooked on History: Going for the Small Story 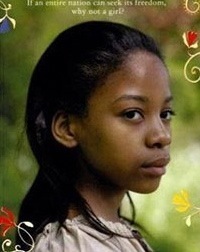 Isabel is a "small" character who makes a Big Event in History stick. Click on the image to read more about CHAINS.

I am a die-hard history fan—gobbling up nonfiction, narrative nonfiction, and historical fiction alike. Other than literature, it’s my favorite subject to teach, and I try hard to rub some of that passion off on my students.

Jim Murphy's An American Plague (a Newbery Honor Book! a Sibert award winner! a National Book Award finalist!) is an excellent nonfiction book that deserves all those accolades. It's about the deadly yellow fever epidemic of 1793 that struck Philadelphia, then the capitol city of the new United States of America.

I loved it and planned to use it to talk about current events and the science of staying healthy (the H1N1 flu epidemic was in full scare). But, I was having trouble getting kids to read it.

What they told me was, “We want to read a story.” How could I argue? They wanted to read!!!

Then, a student clued me in to a "y'gotta-read-this" book on the same historic epidemic.

Fever 1793 by Laurie Halse Anderson is a historical novel (here’s a fictional taste).

My student's enthusiasm prompted me to investigate the author further, and as soon as I picked up Anderson's book CHAINS, the first title in her Seeds of America trilogy about the American Revolution, I devoured it.

The key to this tale about a Great Event in History is the smallness of the main character, 13-year-old Isabel. When war breaks out, she is a slave of Loyalists to the British crown, living with a family in New York City.

By "small," I mean that Isabel is not a larger-than-life heroine. Just the opposite. She’s an ordinary teen trying to improve the horrible hand she’s been dealt.

Isabel and her autistic sister, Ruth, were supposed to be freed at the death of their master. However, a greedy nephew has other plans and before Miss Mary Finch is cold in her grave, he sells the pair of girls to the cruel Lockton family. Then, unbearably for Isabel, five-year-old Ruth disappears!

Isabel’s motive in life narrows even further into one sharp, self-centric focus: Above all else, she wants to find her sister and achieve the freedom she knows they both deserve. She will do whatever it takes to remove the chains of slavery—even putting her own well-being at risk. She will support whichever side of the war, British or American, that offers her the best chance at freedom.

Then, Isabel meets a young, selfless slave named Curzon who is genuinely, whole-heartedly devoted to the American cause. He tries to convince her to spy on Mr. Lockton on behalf of the Americans, since her slave status, gender, and tender age make her an invisible fixture in the household. She’ll do that, and more, if it guarantees her freedom!

Despite Isabel's harsh life as a slave (not glossed over by Anderson), a seed of humanity remains in Isabel's heart. She somehow retains a sense of generosity and compassion for others and, to me, this admirable quality gives her a great sense of dignity.

I also admire her strong moral center. She is sent to care for Lockton's elderly, frail aunt, a so-called "good master." But Isabel doesn't distinguish between masters: slavery is wrong, and freedom is right! Period.

Isabel is a character who sticks with you for a long time. Lucky for us, Anderson has continued the fight for freedom (personal and national) in Forge, the second novel in the trilogy.

My point is that history isn't always about a victor or a hero; the everyday struggles of people living through events can make for even more compelling tales.

In that vein, I suggest reading CHAINS along with Gary Paulsen’s Woods Runner (check out the first chapter here). The main character, Samuel, tracks his parents through the wilderness to British-held New York City.

I will not give up on getting nonfiction into my students’ hands. Jim Murphy has many incredible titles including The Great Fire and Across America on an Emigrant Train (both are on my shelves). He also has several historical novels in the Dear America series, and maybe I can introduce my kids to his writing through those books.

Do you have suggestions for compelling nonfiction books and ideas about how to get kids to read them? I'd love to hear your thoughts.

This sounds great. My younger son is more likely to go for historical fiction than my older son, who prefered fantasy at least in his tween years. How long is it? And will the female protagonist work against my son's enjoyment? (Of course you can't answer that, I'll just have to try it out with him.)

Hi, what an excellent post! What you've described is exactly what I try to achieve as an author--getting kids hooked into the stories of ancient lives (I have two middle-grade biographies out: ALEXANDER THE GREAT ROCKS THE WORLD and CLEOPATRA RULES!). Early on, I made the conscious decision to not overwhelm readers with irrelevant dates and names, but to hook them into the stories of these fascinating--and sometimes funny--characters. My belief is that kids are naturally fascinated by history--and especially ancient history--but that we sometimes inadvertently kill that fascination by burying them under layers of details that don't necessarily speak to them.

With my YA novel, CLEOPATRA'S MOON (the story of Cleopatra's only surviving child, her daughter Selene), I was able to focus on the stories of real people and events, and how my characters might have felt about them.

I figure, there's plenty of time when they're in late high school or college for them to learn the stuffy approach to history. But when they're younger, it's more important to capture their hearts and imaginations.

Thanks for the info on your books, and the wise comments about hooking kids on history Vicky! Being a bit of an ancient history nut, I will definitely get Alex and Cleo on my wish list. Wish I would have had them when I was teaching history.

Mrs. Hopping i love your blog! these are really great books!