A Hot Summer Dive Under the Old Oak Trees 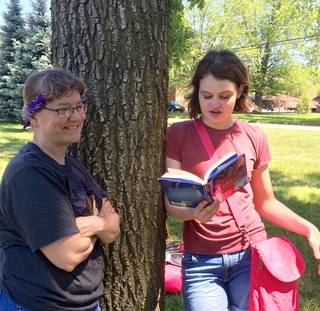 In the shade of a tree (it was sweltering), I listened to Lily, a recent 8th grade graduate, read aloud from her favorite book, Wishtree by Katherine Applegate.

As part of the Kid and Tween Summer Reading Program at our local Livonia Public Library, we decided to invite kids and tweens to share their favorite books outdoors, while we teachers shared ours. With sweltering heat on the chosen day, we wondered how many kids would choose to dive into a pool rather than dive into books for this first-time event.

SUCCESS: We drew more than 75 eager readers, a thrilling turnout that tells us we should do it again, though maybe combine the pool party concept with our read-a-thon. Thank goodness for oaks and other large shade trees.

Our intrepid readers ranged from 3 years old to a newly graduated eighth grade girl, who took turns reading aloud with me (pictured). To kick off the event, a couple of us teachers met with kids and parents in the library to help them pick out books and get a library card if they didn't have one.

Then, we gathered groups outside under the shade trees to talk books. One student was very excited to be reading the classic science-fiction series A Wrinkle in Time, by Madeleine L'Engle after having seen the movie. A Star Wars fan shared Who is George Lucas, by Pam Pollack, from a very popular biography series.

Thanks to these avid readers, I learned about books new to me, including a mystery series that Grace, a third grader, was really, really, really into. Her mother mentioned that she had bought it at a home show, like a Tupperware Party, and I asked her to send me the details.

The 21-book series is called EJ12 Girl Hero, about girls saving the world, and is a bestseller in Australia. For example, in EJ12 Girl Hero 1: Hot & Cold, someone seems to be melting the polar ice cap, and special Agent EJ12 (Emma Jacks) needs to crack the codes, keep her cool, and put the evil-doer's plan back on ice.

I introduced a few of the books I have read and recommend so far this summer, my prime time to refresh and restock and renew my FREADom Classroom Library for the next group of incoming sixth graders. Here are reviews of three titles.

Quick take: An old, neighborhood oak tree named Red has seen it all. Loved it.

Applegate has a talent for rich language and telling stories from unusual points of view. She won multiple awards (Newbery, Christopher Medal, California Book Award, Cristal Kite) for The One and Only Ivan, narrated by a captive gorilla.

The Wishtree narrator is an old red oak, named Red, who teams up with a crow named Bongo to grant a girl's wish for a friend. There are two separate problems going on. First, the girl wishes for a friend and Red wants to grant that wish for her. The second problem is that the woman who owns the property that Red is on wants to cut the tree down.

Sounds simple, but the wish, the grant, the whole scenario leads to a complex effort to save Red from being cut down.

Red can be quite philosophical but with sense of humor that will help kids develop an appreciation for language. Take this exchange from chapter 11, when Red tells Bongo his/her age, precisely two hundred and sixteen rings old:

"Another sproutday," I said. "I still feel like a sapling."

"You don't look a day over a hundred and fifty," Bongo replied. "Best-looking tree on the block."

"I'm really" - I paused for comic effect- "getting up there."

Bongo, who was perched on my lowest branch, sighed. A crow sigh is unmistakable, like a groan from a tiny, cranky old man.

"Tree humor," I explained, just in case Bongo had missed it, although of course she hadn't. Bongo misses nothing. "Because, you know, I'm so tall."

"Really, Red?" Bong stretched, admiring her lustrous blue-black wings. "That's the best you got for me this morning?"

In large part because of the language, this book is a really fun read-aloud.

THE BOY WHO HARNESSED THE WIND, by Kamkwamba and Mealer

Quick take: Autobiography of a 7-year-old from a poor farming family who became an inventor. Inspiring.

The young reader's edition of this New York Times bestseller tells the story of William, age 7, and the only boy in a large farming family in a Malawi village.

At a very young age, William starts dismantling and repairing radios and this tinkering leads to his fascination with the way all things work—especially electrical power. William thrives on education and looks forward to attending secondary school, where he can learn about science.

But then, tragedy strikes the village in the form of a heart-wrenching famine, which is difficult to read about. William is forced to drop out of school. Through his eyes, the famine gives us a personal connection and puts a human face on a problem far too many children in this world endure, but William and his family work together with dignity to make it through to the other side.

During this difficult ordeal, William devotes himself to improving his family's situation by constructing a windmill made out of scavenged materials. He devours science books from the library. Using diagrams and pictures, he's able to comprehend the ideas, if not the exact words of texts, which are written in English.

His devotion to learning is remarkable and unquenchable! In 2007, he unveils his creation but there is no word for it in his native Chichewa language. So, he calls it "electric wind"—a windmill for generating power.

This story is an important reminder of how vital it is to ensure that even the poorest children receive an education. How can the world afford to let so much potential human resource go untapped?

ELIZABETH AND ZENOBIA, by Jessica Miller

This is Miller's debut novel, published in 2017, and the main character, Elizabeth, reminds me of the plucky protagonist Miss Penelope Lumley in The Incorrigible Children of Ashton Place, by Maryrose Wood. The language and setting give both novels a Victorian feel.

Elizabeth's mother has left, and her father, a botanist, has grown sullen and distant toward his only child. He decides to relocate the broken family to his childhood mansion: Witheringe House (Wuthering Heights redux?). Tagging along is Elizabeth's brave, strange companion, Zenobia.

Funny thing is, no one can see Zenobia. (I found it a bit unsatisfying that this oddity is never really resolved in the story.)

A classic fog envelopes the travelers as they arrive at the old homestead, greeted by a housekeeper named Mrs. Pursewell, who, much to Zenobia's envy, has the uncanny superpower to seemingly appear and disappear in rooms at will.

While Zenobia is determined to discover a spirit presence in their new abode, Elizabeth happens upon a copy of her father's first book, The Plant Kingdom. Elizabeth is determined to read what Zenobia refers to as an "impossibly dull" book.

In the meantime, the girls explore the grounds and the off-limits wing of the house, and we are treated to the inevitable mysteries such a creepy house has to offer: an ominous overgrown maze of hedges, a smiling gardener with a talent for grafting plants (except that her father does not employ a gardener), and the mysterious appearance of a young girl's image in the vine pattern on the nursery wallpaper.

Could The Plant Kingdom in her father's "dull" book be a real and exciting place after all?